The prevalence of legal performance-enhancing substance use and potential cognitive and or physical doping in German recreational triathletes, assessed via the randomised response technique 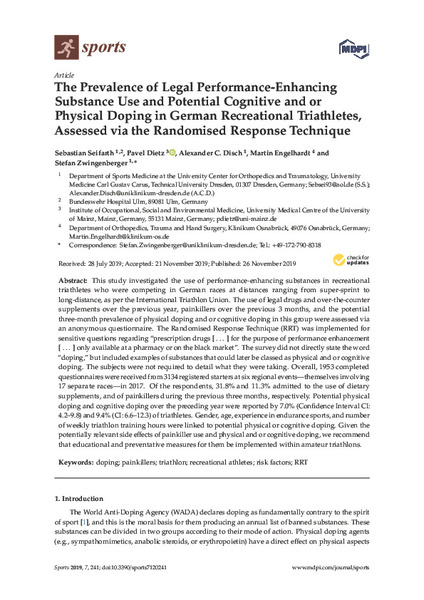 This study investigated the use of performance-enhancing substances in recreational triathletes who were competing in German races at distances ranging from super-sprint to long-distance, as per the International Triathlon Union. The use of legal drugs and over-the-counter supplements over the previous year, painkillers over the previous 3 months, and the potential three-month prevalence of physical doping and or cognitive doping in this group were assessed via an anonymous questionnaire. The Randomised Response Technique (RRT) was implemented for sensitive questions regarding “prescription drugs [ ... ] for the purpose of performance enhancement [ ... ] only available at a pharmacy or on the black market”. The survey did not directly state the word “doping,” but included examples of substances that could later be classed as physical and or cognitive doping. The subjects were not required to detail what they were taking. Overall, 1953 completed questionnaires were received from3134 registered starters at six regional events - themselves involving 17 separate races - in 2017. Of the respondents, 31.8% and 11.3% admitted to the use of dietary supplements, and of painkillers during the previous three months, respectively. Potential physical doping and cognitive doping over the preceding year were reported by 7.0% (Confidence Interval CI: 4.2–9.8) and 9.4% (CI: 6.6–12.3) of triathletes. Gender, age, experience in endurance sports, and number of weekly triathlon training hours were linked to potential physical or cognitive doping. Given the potentially relevant side effects of painkiller use and physical and or cognitive doping, we recommend that educational and preventative measures for them be implemented within amateur triathlons.