Neural response during the activation of the attachment system in patients with borderline personality disorder: An fMRI study 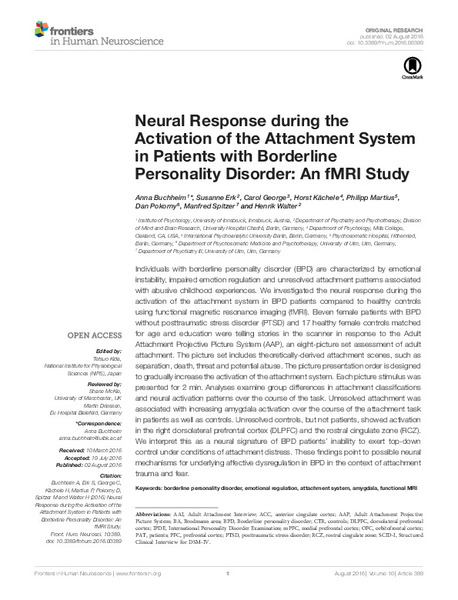 Individuals with borderline personality disorder (BPD) are characterized by emotional instability, impaired emotion regulation and unresolved attachment patterns associated with abusive childhood experiences. We investigated the neural response during the activation of the attachment system in BPD patients compared to healthy controls using functional magnetic resonance imaging (fMRI). Eleven female patients with BPD without posttraumatic stress disorder (PTSD) and 17 healthy female controls matched for age and education were telling stories in the scanner in response to the Adult Attachment Projective Picture System (AAP), an eight-picture set assessment of adult attachment. The picture set includes theoretically-derived attachment scenes, such as separation, death, threat and potential abuse. The picture presentation order is designed to gradually increase the activation of the attachment system. Each picture stimulus was presented for 2 min. Analyses examine group differences in attachment classifications and neural activation patterns over the course of the task. Unresolved attachment was associated with increasing amygdala activation over the course of the attachment task in patients as well as controls. Unresolved controls, but not patients, showed activation in the right dorsolateral prefrontal cortex (DLPFC) and the rostral cingulate zone (RCZ). We interpret this as a neural signature of BPD patients’ inability to exert top-down control under conditions of attachment distress. These findings point to possible neural mechanisms for underlying affective dysregulation in BPD in the context of attachment trauma and fear.