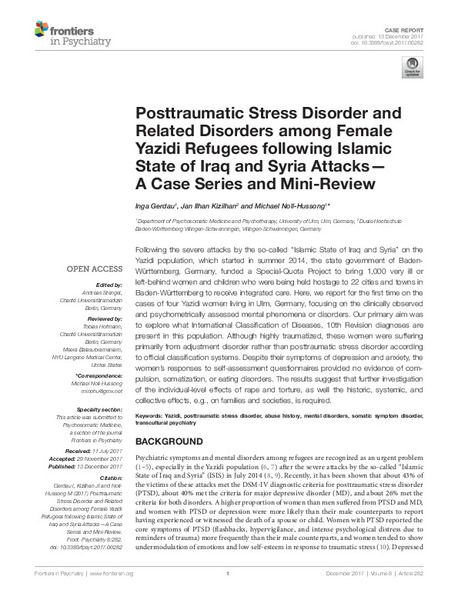 Following the severe attacks by the so-called “Islamic State of Iraq and Syria” on the Yazidi population, which started in summer 2014, the state government of Baden-Württemberg, Germany, funded a Special-Quota Project to bring 1,000 very ill or left-behind women and children who were being held hostage to 22 cities and towns in Baden-Württemberg to receive integrated care. Here, we report for the first time on the cases of four Yazidi women living in Ulm, Germany, focusing on the clinically observed and psychometrically assessed mental phenomena or disorders. Our primary aim was to explore what International Classification of Diseases, 10th Revision diagnoses are present in this population. Although highly traumatized, these women were suffering primarily from adjustment disorder rather than posttraumatic stress disorder according to official classification systems. Despite their symptoms of depression and anxiety, the women’s responses to self-assessment questionnaires provided no evidence of compulsion, somatization, or eating disorders. The results suggest that further investigation of the individual-level effects of rape and torture, as well the historic, systemic, and collective effects, e.g., on families and societies, is required.