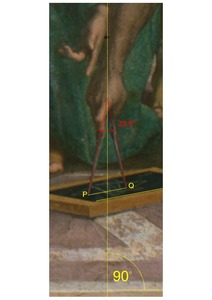 The analysis of the Astronomical Table in Raphaels School of Athens shows that the "crayon-drawing" is based on Copernicus’ Commentariolus, the first textual document of the modern era. For its visualization Raphael used triangles and arithmetic fractions. After Giorgione did before, he also succeeded in discovering the four Jupiter satellites which he had depicted in the fresco as the mythic figures Callisto, Arcas, Io and Epaphus.