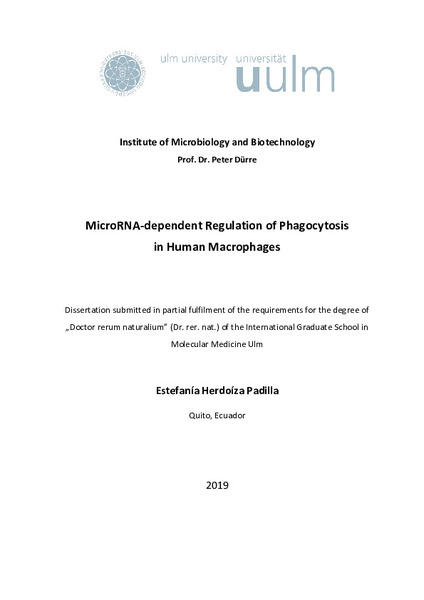 Phagocytosis is an immunobiologic process mainly performed by professional phagocytes such as macrophages. It is crucial for recognition and removal of apoptotic cells and invading microorganisms. Thus, it plays an important role in maintaining tissue homeostasis and in the initiation of appropriate immune responses. The phagocytic process is extremely complex and must be tightly regulated. Over the last decade, endogenous small non-coding RNAs (miRNAs) have emerged as important regulators of biological pathways by fine-tuning expression of gene regulatory networks. Some recent studies have revealed a number of miRNAs involved in the differentiation and activation of human macrophages. However, little is known about the role of miRNAs in macrophage phagocytosis. In order to systematically identify miRNAs involved in the regulation of phagocytosis, a comprehensive genome-wide miRNA screen (miRbase v.21) was performed. To this end, first a cell-based phagocytosis assay was established using of phorbol-12-myristate-13-acetate (PMA)-activated THP-1 macrophage-like cells and serum-opsonized fluorescent latex beads. Further, miRNA mimics transfection was optimized and downscaled to a 96-well plate format for screening purposes. To ensure quality and reproducibility during the screen, different controls were included and randomly placed on each screening plate. A non-targeting small interfering ribonucleic acid (NT-siRNA) control served as a normalization control to allow inter-plate comparison. Out of the 2566 miRNAs analyzed, several led to significant changes in phagocytosis. From these, only 95 highly significant and robust miRNAs hits were again analyzed in a validation screen. Among these, miR-124-5p and miR-6793-5p were validated as novel regulators of phagocytosis. Transfection with miR-124-5p mimics significantly reduced phagocytosis of serum-opsonized fluorescent latex beads and live bacteria. In contrast, transfection with miR-6793-5p mimics significantly enhanced phagocytosis of both. In silico analysis suggested miR-124-5p targets genes involved in regulation of the actin cytoskeleton. Transcriptional analyses of miR-124-5p transfected cells revealed reduced expression of genes encoding for several subunits of the ARP2/3 complex, a crucial regulator of actin polymerization and thus, phagocytosis. Luciferase reporter assays for in silico predicted miR-124-5p binding sites on these mRNAs indicate that at least two of the genes (ARPC3 and ARPC4) are direct targets of miR-124-5p. This was also supported by western blot analysis that showed significant reduction of ARPC3 and ARPC4 protein levels in miR-124-5p transfected cells. Additionally, in silico analysis for mir-6793-5p targets revealed targets involved in the negative regulation of cytoskeleton dynamics and phagocytosis. Transcriptional analyses of miR-6793-5p transfected cells suggested reduced expression of genes encoding for the GTPase-activating protein ARHGAP25 and the lipid phosphatases SHIP-1 and SHIP-2. Yet, these results were not significant. Thus, further experiments and target prediction analysis are needed to clarify the molecular mechanism underlying miR-6793-5p dependent regulation of phagocytosis in THP-1 macrophages. Collectively, these results provide a better understanding of the role of miRNAs in regulation of cytoskeleton dynamics and thus, in phagocytosis of human macrophages.