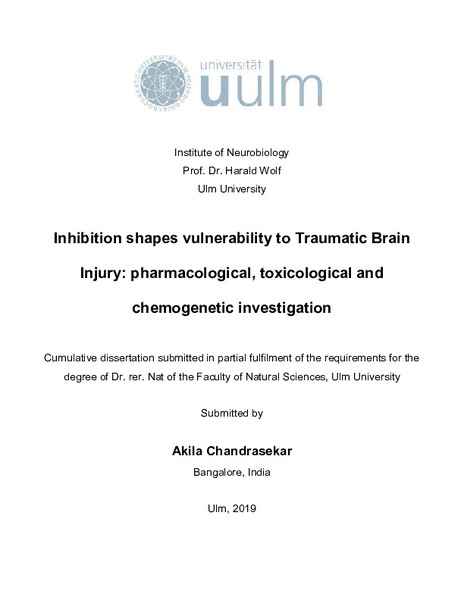 Traumatic brain injury (TBI) is a worldwide public health problem typically caused by contact and inertial forces acting on the brain with a broad spectrum of symptoms and disabilities. The molecular mechanism underlying the primary and secondary injuries after trauma have not been well investigated. Excess excitation has been hypothesized to be a significant part of the damage after traumatic brain injury. On the other hand, reduced neuronal excitability and a disturbed excitation/inhibition balance have also been detected post TBI. Clinical data show that ethanol intoxication is a potential modifier of TBI outcome. Here, we aimed at understanding the impact of ethanol intoxication on TBI-associated neurological deficits, signaling pathways and pathogenic cascades unfolding after TBI to identify new modifiers of TBI pathophysiology. We also Pharmacologically Selective Activation Module (PSAM) and Pharmacologically Selective Effector Module (PSEM) control of PV-Cre+ neurons and the Designer Receptors Exclusively Activated by Designer Drug (DREADD) control of principal neurons in a blunt model of TBI to explore the role of inhibition in shaping neuronal vulnerability to TBI. We also elucidated that the protective effect of PV inactivation was suppressed during the expression of the nuclear calcium buffer, PV nuclear localization sequence (PV-NLS), thus implying an activity-dependent neuroprotection. Thus, we give an insight into the neuroinflammatory and IEG pathways unfolding after TBI. We identify, for the first time, phosphorylation of ErbB2/ErbB3 in the excitatory synapses of the injured cortex and that ErbB2 inhibitors were able to recapitulate, to a significant effect, the neuroprotective effect of trauma. Finally, we were able to show that sustaining neuronal excitation in the early phase of TBI is neuroprotective by increasing activity dependent survival.