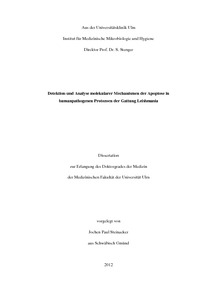 The species Leishmania major is an important parasite which causes diseases named leishmaniasis in humans. Leishmania has been in the focus of scientific studies in the last decade, in which a crucial finding was the detection of morphological characteristics of apoptosis in unicellular parasites. In contrast, molecular pathways of apoptosis in protozoa remained unidentified to a large extent. Therefore, our first attempt was to further explore several known processes during apoptosis in Leishmania major. In stimulation studies amastigotes and promastigotes showed different susceptibility against chemicals, the first became more positive for annexin V staining after staurosporine stimulation, the latter developed a larger subpopulation of dead cells after stimulation with miltefosine. Analysis with fluorescence-activated cell sorting (FACS) confirmed the apoptotic potential for both staurosporine and miltefosine by showing subpopulations of hypoploid cells after stimulation. In the next step, the role of reactive oxygen species (ROS) during apoptosis induction was elicited with FACS analysis. Data showed stage-specific differences with promastigotes being physiological negative for ROS and amastigotes being highly positive for ROS staining. The postulated influence of ROS during apoptosis mediation was supported by promastigotes becoming highly positive for ROS after apoptotic stimulation. Application of ROS scavengers led to a decline of the hypoploid subpopulation. The following experiments focused on the measurement of enzyme regulation of Leishmania major ascorbate Peroxidase (LmAPX) and Endonuclease G (EndoG), data obtained from light cycler and fluorescence microscopy probes strengthened the hypothesis of LmAPX being an antiapoptotic and EndoG being a pro-apoptotic enzyme. New possible mediators of apoptosis were identified after blocking protein synthesis with cycloheximide, a calpain-like cystein peptidase might have anti-apoptotic effects in Leishmania.