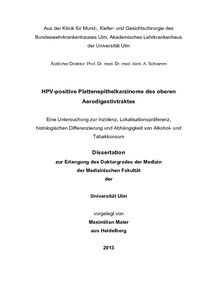 n the last years, the infection with human pipilloma virus and in particular with the subtype HPV16 showed to be an additional major risk factor for the developement of squamous cell cancer in the upper aerodigstive tract next to the abuse of alcohol and tobacco. Until now there only have been few studies performed in Germany concerning this association so far. In the present study, specimens from 223 patients with squamous cell carcinomas of the oral cavity, oropharynx, hypopharynx and larynx were analyzed for HPV DNA and p16INK4a expression. In 17.5 % of all specimens HPV16 DNA could be detected and all of these HPV16-positive specimens showed a strong p16INK4a expression. Other HPV subtypes were not detected. The group of the tonsillar carcinomas showed the highest prevalence for HPV16 DNA with 37,5 % and lowest with 2.8 % in the group of larynx carcinomas. We observed significantly lower consumption of alcohol an tobacco in the group of patients with HPV16 positive tumors (p<0.0001). Also the HPV16 positive tumors of the tonsils showed a significantly higher incidence of cervical lymph node metastasis (p<0.016).