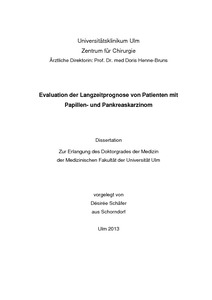 Summary - Background and objective: We performed a single-institution outcomes analysis of both pancreatic and ampullary cancer to identify prognostic factors and compared the results with literature. Patients and method: A retrospective analysis was performed of all patients registered in the tumour documentation of the University Ulm, Surgery Centre. Absolute and relative frequencies of several features of both tumour entities were established and overall survival were estimated using the Kaplan-Meier method. In multivariate analysis (independent) prognostic factors were identified and compared with international literature. Results: Between January 1996 and December 2009 505 patients with ductal adenocarcinoma of the pancreas and 69 patients with ampullary carcinoma were registered in the tumour documentation of the Surgery Centre of the University Ulm. Of these, 258 patients with pancreas cancer and 63 patients with carcinoma of the ampulla of Vater were undergoing resection. In case of pancreatic cancer R0 resection (R1 HR 1.94; 95 %-KI 1.31 - 2.86; p < 0.001) and grading (G3 and G4 HR 2.67; 95 %-KI 1.92 - 3.70; p < 0.001) were both independent prognostic factors, whereas sex (male HR 0.40; 95 %-KI 0.20 - 0.80; p 0.009) and UICC-stage (stage 2 HR 4.03; 95 %-KI 1.62 - 10.03; p < 0.001, stage 3 and 4 HR 17.00; 95 %-KI 4.86 - 59.42; p < 0.001) were for ampullary carcinoma. A certain role in prognosis was proved for lymph node stage and UICC-stage in case of ductal adenocarcinoma of the pancreas and T-, N- and M-stage in case of cancer of the ampulla of Vater. Conclusion: Various features of both pancreatic and ampullary cancer emerged to be independent prognostic factors. The results were largely reflected in literature.