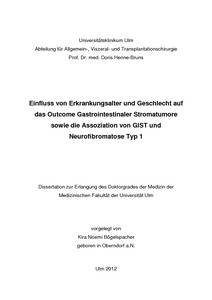 Gastrointestinal stromal tumors (GIST) are the most common mesenchymal neoplasms of the gastrointestinal tract. About 75 % of patients diagnosed with GIST are older than 50 years. Prognostic factors of GIST are limited and epidemiological factors are not considered in any risk classification. The aim of this study was to investigate the influence of age and sex to the outcome of GIST. 87 patients under 50 years (collective I, m/f = 0.8) and 125 patients above 50 years (collective II, m/f = 0.8) were analyzed, by way of an observational, comparative study. The considered parameters were age, sex, tumor localization, histological subtype, tumor size, mitotic rate, risk classification, secondary malignancies, GIST-dependent exitus letalis as well as disease-free and disease-specific survival. Statistical evaluation showed in general a better prognosis for patients younger than fifty years compared to patients older than fifty years (p = 0,015). The most important result of the study was a significantly more favorable outcome of young females in comparison to elderly females (p = 0.008) and to young males (p = 0.033) while there was no significant difference comparing young males to elderly males (p = 0.326) and comparing elderly females to elderly males (p = 0.596). Overall young females showed the best prognosis (p = 0.006). In a second part of this study sporadic GISTs were compared to GISTs related to Neurofibromatosis Type 1 (NF1). 12 patients with GIST and NF1 (collective III, m/f = 0.3) were compared to an epidemiological representative GIST-collective (collective IV, n = 141, m/f = 0.9). According to the reviewed parameters, GIST of patients with NF1 appeared significantly earlier than in sporadic cases (p = 0.046), were more often localized in the small intestine (p = 0.001) and had a significantly higher rate of secondary malignancies (p = 0.035). In summary the differences between NF1-related GIST and sporadic GIST described in literature were reconfirmed by this study.