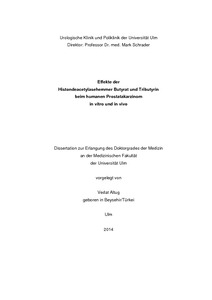 Histone deacetylase inhibitors (HDACi) are a relatively new and promising class of drugs in the therapy of malignant diseases. They could demonstrate antiproliferative and proapoptoic effects on various tumours and cause changes in gene ecpression patterns in treated cells. In this thesis the in vitro and in vivo efficiency of the classic HDACi butyrate and its prodrug tributyrin on prostate cancer cells LNCaP and PC-3 were investigated. Methods: In vitro cell culture experiments were performed with focus on changes in cell morphology, proliferation and apoptosis. For in vivo testing tumour cells were seeded on chicken egg chorionallantois membrane (CAM) to analyze apoptosis rate and implanted in a xenograft model using nude mice for assesment of tumour growth and Ki-67 index. To gain more insight into the underlying pathways western blot analysis was performed for gene products p21, Rb, c-myc, bcl-2 and bcl-XL. Results: Both sodium butyrate and tributyrin had a considerable treatment effect on prostate cancer cells in vitro as well as in vivo causing morphologic changes in tumour cells, inhibiting proliferation, and increasing apoptosis rate in vitro and in vivo, leading to significantly smaller tumours in the mouse model, and decreasing Ki-67 index of mouse tumours. While in the mouse model there couldn"t be seen any significant differences in the potency of butyrate and tributyrin, in the other experiments tributyrin generally had a stronger effect than butyrate. Western-blot analysis showed an upregulation of p21, hypophosphorylation of Rb, downregulation of c-myc and bcl-XL while no changes where seen in bcl-2. A pathway model was suggested to explain the mode of action of HDACi. The given results are encouraging for performing clinical trials with butyrate/tributyrin as well as other HDACi as drugs for prostate cancer treatment or chemoprophylaxis, possibly in combination with or in addition to established treatment methods.