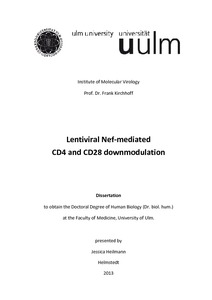 Different properties allow HIV-1 and SIV to establish a chronic disease, e.g. genome insertion into long living quiescent T cells, high genome mutations and evasion of the immune system. The lentiviral Nef protein undertakes important functions of evading the immune system. One of these functions is the downregulation of CD4 receptors from infected cell surfaces. Downregulation of the main entry receptor of HIV-1 prevents superinfection and related cell death, enhances release and infectivity of viral particles and might weaken the immune response, as it is an important costimulatory factor of TCR-mediated T cell activation. Although it is well known that CD4 downmodulation is a key function which is highly conserved among HIV-1 and SIV Nef proteins, the mechanism of downmodulation for a broad panel of different HIV-1 group and SIV Nefs remained elusive. Thus the first goal of this study was to investigate the CD4 downregulation pathway. As available studies so far point towards an endocytosis enhancement probability I evaluated the capacity of this pathway for a broad panel of nef alleles. Furthermore, I chose a test system which allows me to measure intracellular retained CD4 receptors, as another possible downregulation mechanism, which is predominantly thought to be used for MHC-I downregulation. I also measured overall downregulation capabilities of each HIV-1 and SIV nef allele to be able to put the obtained values into an overall context. Besides CD4, CD28 is another Nef-mediated downregulated surface receptor of infected host cells. This receptor as well plays important roles in immune responses by providing co-stimulatory signals for T cell activation. It was suggested that the mechanisms of Nef-mediated CD4 and CD28 downmodulation are related (Swigut et al., 2001), so the second goal of this study was to investigate CD28 downregulation mechanisms.