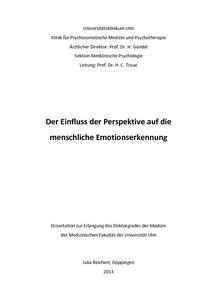 In contact with other people, we show emotions and perceive them by our counterpart. Each emotion has a corresponding facial expression due to the interaction of various facial muscles. Proper recognition and matching of these expressed emotions makes an adequate response to other people possible and helps to optimize social interactions. Therefore, the individual´s ability to detect mime encoded basic emotions is of increasing scientific interest. So far, research has paid little attention to the pose of the stimulus face. The following study was conducted in order to investigate the effect of varying pose of stimulus faces on facial emotion recognition. The applied stimulus material `Pictures of Facial Affect-Ulm´(Limbrecht et al. 2012) makes a differentiated assessment of emotion recognition from different perspectives possible. The conducted experiment compared facial emotion recognition accuracy for five different perspectives by presenting emotional faces showing happiness, sadness, anger, fear, surprise and disgust for 300 ms in a standardized setting, rated by 70 participants. It was hypothesized that increasing approximation of the profile plot will decrease the emotion recognition performance. Contrary to our expectations, surprise and disgust were recognized equally well independent of the perspective. In contrast, significant differences for sadness, anger and fear and partially for happiness have to be highlighted. Furthermore gender differences were detected. Despite assumed superiority of women in the emotional range, men showed a significantly better recognition performance for the emotion anger in the present study. In summary, results underline the importance of head orientation as a contextual element for the interpretation of facial expressions, but underlying mechanisms still remain to be not entirely solved.