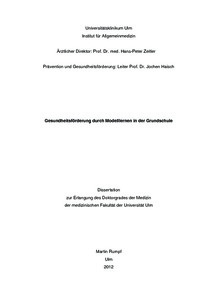 Introduction: Increasing numbers of children worldwide are dealing with a lack of physical exercise and obesity, which are huge risk factors for their future health. Because of that, children should be in the center of health promotion and prevention. Method: The effect of different role models as an incentive for children to do sport and have fun as well as the additional implementation of a gratification is supposed to improve the childrens attitude and skills according to the social cognitive theory. Children of grade three and four (n=105) took part in a 90 minute physical exercise in basketball as a part of a campain of a local basketball organisation in schools. The participants were randomly assigned to groups with different role models as well as an optional award. The difference of the two role models (professional basketball player and trainee) was mainly based on being more equal to the children concerning age and size. The pupils were tested by performing exercises in coordination and condition, and they answered a questionnaire before and six weeks after the intervention. Outcome: There is significant improvement in the coordination (p=0,001) as well as in the condition (p=0,006). Furthermore there is a strong evidence (p=0,002) for a better effect of the more equal and younger role model, especially with boys. Conclusion: Improvement can be achieved even in a non-recurring lesson with a role model. The more children can identify with the role model due to similarities, the more effect can be seen.