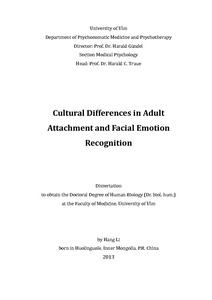 Based on both theoretical and empirical approaches, the aim of this dissertation was to explore the relationship between adult attachment and facial emotion recognition in the context of cultural differences. Our first hypothesis was: the performances of emotion recognition on facial expressions in our subject: Chinese in China (CC), Chinese in Germany (CG), and German in Germany (GG) are correlated with their adult attachment systems. According to the theory of attachment, we supposed that CG may have more secure attachment quality since they have the ability to explore their life in Germany. Our findings indicated that CG have a more secure attachment pattern and lower levels of attachment anxiety and avoidance compared with CC. Additionally, results of study 2 showed more intercultural differences between CC and GG. In particular, study 2 was aimed to investigate the emotion recognition accuracy on the six basic emotions between Chinese and Germans when judging German facial expressions. The results of this study confirmed the universality of the happiness emotion, but cultural differences on other facial expressions of emotion. The GG showed the best performance, the CC had the worst results, whereas the results found for CG were fall in between the other two groups. This finding especially reflected in the accuracy of facial emotion recognition of fear, disgust, and surprise. In addition, the deficit in recognizing anger faces in Chinese groups was observed. For CG, the ability to recognize German expressions of anger did not improve although they were living in Germany. Moreover, German subjects showed a lower accuracy for the recognition of sadness compared with Chinese subjects. For German subjects, their attachment system was not correlated with the recognition accuracy for German facial expressions. However, the attachment system influenced German facial emotion recognition among Chinese participants.