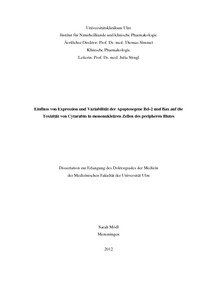 The anti-metabolite cytarabine is commonly used in the treatment of acute myeloid leukemia. Severe adverse drug reactions, especially hematotoxicity, are limiting the clinical use of cytarabine. Interindividual differences in drug response and toxicity have been observed. Cytarabine, like most chemotherapeutic agents, leads to induction of the mitochondrial apoptotic pathway via damaging DNA. The aim of this study was to examine whether variability in the two most important genes of the mitochondrial apoptotic pathway bcl-2 and bax can explain the interindividual differences in drug response. Therefore PBMCs from 100 individuals were isolated and the cells were incubated in the presence of cytarabine. The amount of apoptotic cells was measured as a parameter for cytarabine cell toxicity. In addition, RNA samples for gene expression analysis and DNA for genotyping were collected. We could demonstrate that the -248 G>A polymorphism in the bax gene was associated with a lower bax gene expression and a significantly lower bax/bcl-2 ratio. Since a lower ratio was also correlated with lower toxicity of cytarabine in blood cells, the bax -248 G>A SNP could prove to be an indirect prognostic parameter for cytotoxicity of cytarabine.