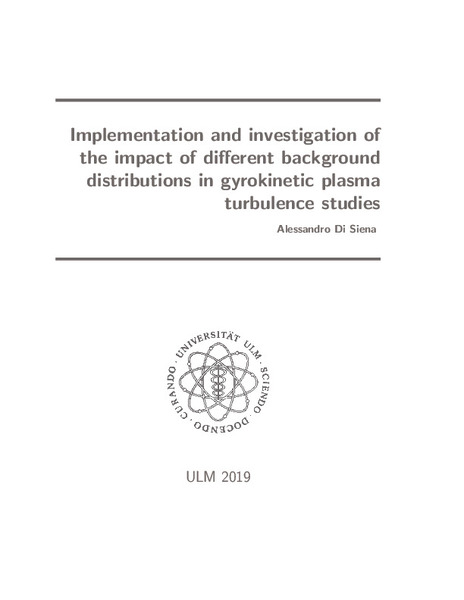 One of the most fascinating projects in the current century is recreating the physical conditions of the center of a Star as an alternative energy source. For this purpose, large temperatures are required (100 million of Kelvin degrees) and the main fuel is found at the so-called plasma state. One of the central issues for fusion energy to be tackled is turbulence, which is destabilized by plasma micro-instabilities. It arises due to the large pressure gradients - from the center to the edge of the de- vice - and strongly reduces plasma confinement and reactor performances. Due to their highly nonlinear features, only very limited solutions can be obtained by solv- ing the basic equations analytically. Therefore, the effect of turbulence on plasma confinement is usually investigated through sophisticated modelling tools, such as gyrokinetic theory. This is a reduced model based on experimentally motivated or- dering assumptions allowing approximations of the underlying equations. In the course of this work, the gyrokinetic code GENE, developed at IPP Garching under the guidance of Prof. Dr. Frank Jenko, will be extensively employed and extended. In the first part of this work, the basic gyrokinetic equations will be re-derived by applying an often employed splitting between fluctuating and equilibrium parts of each quantities. The standard gyrokinetic theory considers a locally thermalized background, i.e. a local Maxwellian distribution function. While many examples exist where plasma core turbulence studies could be performed successfully with this particular choice, a more flexible setup is required to capture asymmetries and anisotropies as, for instance, those that exist in energetic particles studies and astro- physical scenarios. The first goal of this work is to replace the local Maxwellian both in the underlying equations and in the source of the gyrokinetic code GENE by a generic background distribution function. The latter could e.g., either be set to an- alytic expressions or taken from experimental measurements or numerical studies of beam-heated plasma distributions. After verification studies on the extended version of GENE, it is applied in experimentally relevant parameter regimes. The impact of fast ion velocity asymmetries on recent results predicting a significant stabilization of electromagnetic turbulence is investigated. Another part of this work is aimed to understand the basic physical mechanisms involved in the recently discovered beneficial impact of fast particles on plasma con- finement. Different stabilizing mechanisms are identified. Fast ions are found to interact with the background microturbulence through a wave-particle resonance mechanism, if the fast ion magnetic drift frequency is close enough to the frequency of the relevant unstable mode. Optimization of the heating schemes and extrapola- tion to future fusion reactors are also discussed. However, this resonance mechanism can only partially explain the numerical and experimental observations that linked the beneficial energetic particle effect to an increase of the kinetic-to-magnetic pres- sure ratio. A detailed analysis based on sophisticated energy diagnostics able to capture the full evolution of the free energy of the system is employed. It is found that the nonlinear excitation of subdominant, energetic particle induced modes which are marginally destabilized via energy transfer through different scales and frequen- cies plays a central role. These modes deplete the energy content of the turbulence driven by thermal species and strongly decorrelate the turbulent complex structures. Furthermore, in the final part of this work, energetic particle modes which re- quire velocity space asymmetries to be driven are investigated. For the first time, EGAMs (energetic-particle-induced geodesic acoustic modes) are studied with the code GENE. They are coherent structures which oscillate at a fixed frequency. Re- cently, they have become of particular interest due to the possible interaction between EGAMs and plasma turbulence. In particular, here, the impact of more realistic plasma magnetic geometries on the linear dynamics of these modes is addressed and the findings are applied to a realistic plasma discharge.