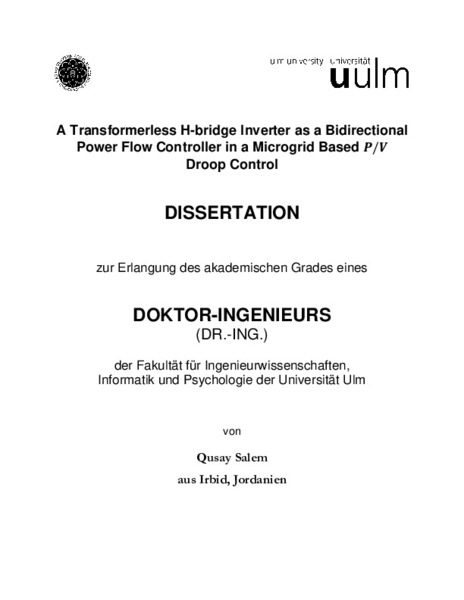 In modern power distribution grids, the evolution of new power control methodologies in microgrid applications is growing increasingly due to the large demand for DG sources integration. However, with the rising level of the DG sources penetration in the distribution network and for maintaining a reliable operation of the main grid, the power flow exchange at the point of common coupling between the microgrid and the utility grid should be controlled. A few research studies in academia and industry has concentrated on the decentralized bidirectional power flow control, especially in low-voltage distribution networks. Therefore, in this thesis, a series transformerless H-bridge inverter which plays the role of a series power flow controller is placed at PCC between the microgrid and the main utility grid to satisfy this target. This dissertation focuses on developing suitable power control strategies and algorithms of the system components to satisfy a desired real power flow reference at PCC. The proposed work is realized by power flow calculations and time-domain simulations, respectively. In power flow calculations, the series power flow controller is modeled as a voltage source inverter, where an overall power flow algorithm and an optimization function are designed to control the real power transfer between both networks. The limits of the proposed approach have been investigated by adjustment of different droop settings and various network conditions. However, in time-domain simulations, the proposed series controller is modeled as a transformerless H-bridge inverter, where two novel power control strategies are implemented to control the bidirectional real power transfer at PCC. Furthermore, the power control loop of the DG units in the microgrid is supported by P/V droop characteristic which is varied depending on the PCC voltage changes. The bidirectional real power flow is controlled by injecting the needed voltage magnitude and phase angle depending on the desired and measured real power at PCC. The series injected voltage changes the microgrid side voltage and thus, the P/V droop controllers respond automatically to satisfy the assigned power reference. Several case scenarios have been investigated using SimPowerSystems and PLECS tool boxes of Matlab/Simulink. The proposed methods and methodologies show promising results, in which they confirm the feasibility and applicability of the proposed series power flow controller concept and its associated methodologies. A verification task has been fulfilled by investigating the disconnection and reconnection process of the microgrid and the proposed series power flow controller under short circuit events. The microgrid is represented by a single DG unit and the series power flow controller is represented by the transformerless H-bridge inverter. The islanding and resynchronization process of the microgrid is redeemed by activating a synchronization controller within the island control mode of the microgrid. However, the disconnection and reinsertion process of the transformerless H-bridge inverter is realized based on two different approaches which are selected depending on the fault location. After fault clearance, the simulation results of the test validation model depict smooth transition and soft reinsertion of the microgrid and the transformerless H-bridge inverter, respectively.