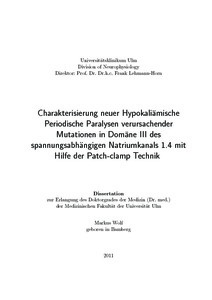 Hypokalemic periodic paralysis (HypoPP) belongs to the group of periodic paralysis and differs from HyperPP by the low serum potassium concentration during the paralytic symptoms. The typical recurrent episodes with temporarily flabby paralysis and spontaneous remission can be triggered by carbohydrate-rich food or coldness. The autosomal-dominant muscle disease is caused by mutations in the voltage-dependent muscular calcium (HypoPP type 1) or sodium (HypoPP type 2) channel. The aim of this thesis was the electrophysiological characterization of the two new mutations R1135H and R1135C in the voltage-dependent muscular sodium channel which are located in a HypoPP-associated area in the voltage sensor of domain III. After cultivation of HEK293 cells and transfection of sodium channels the gating characteristics of the mutations and the wild type of the channel have been measured and the transitions of the different sodium channel states have been detected by appropriate pulse protocols. Mutations of the voltage sensor of domain III seem to have a minor influence on the activation. The HypoPP-typical shift of fast inactivation towards hyperpolarized potential and the decelerated recovery from fast inactivation supports the explanation of the paralytic symptoms because the excitability at the resting membrane potential is lowered due to less available sodium channels. The shift of slow inactivation towards hyperpolarized potential and the reduced voltage dependency highlights the importance of domain II in developing a HypoPP, based on former measurements. These changes have been found in a milder form in this thesis which indicates a less important role of domain III for the slow inactivation. The changes of the gating characteristics of R1135H and R1135C do not provide a broad explanation for the symptoms of HypoPP patients. Nowadays so-called leak currents are supposed to cause HypoPP. The changes of the gating characteristics are probably of modulating nature.