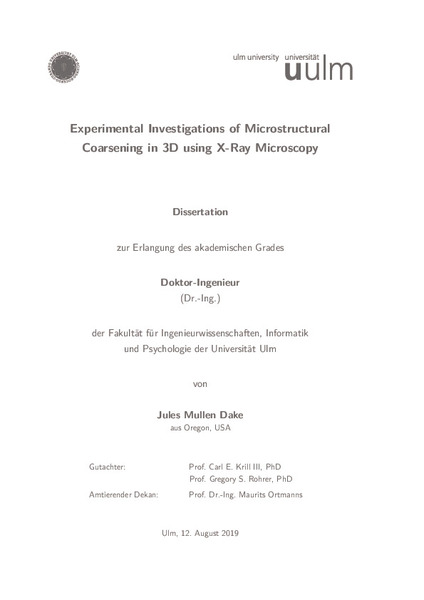 Since the Stone Age, the development of new materials with enhanced properties has driven technological advancements and continually expanded the limits of human endeavor. Over the last century, improvements in the experimental characterization of materials have also revealed how decisively the microstructure—the structure of a material on the microscopic level—affects material properties. A modern engineer can control the temperature, pressure and time of various processing steps to set the desired microstructure of a material during production. At the same time, computer simulation has become an important tool for predicting the effect that these processing parameters will have on microstructural evolution, and although the physical phenomena underlying microstructural evolution are three-dimensional (3D) in nature, conventional metallographic characterization techniques only provide two-dimensional snapshots of a material’s microstructure. In order to better optimize and verify computer simulations, which, thanks to exponential increases in computing power, can easily be performed in 3D, time-resolved 3D experimental data are required. Filling in this fundamental gap in our experimental knowledge of microstructural evolution was the motivation behind this doctoral thesis. The advent of three-dimensional x-ray (3DXRD) microscopy created exciting new possibilities for the characterization of materials, and its inherently nondestructive nature allows for time-resolved studies of microstructure in 3D. Microstructural coarsening caused by heat treatments was studied in two aluminum alloys. The first was a single-phase Al-1 wt% Mg alloy, which coarsens by grain growth, and the second was a semisolid Al-5 wt% Cu alloy, for which Ostwald ripening is commonly assumed to be the dominant coarsening mechanism. Experiments were performed at the synchrotron radiation facility SPring-8 in Sayō, Japan. A box-beam implementation and optimized use of far-field and near-field x-ray detectors allowed for the rapid collection and reconstruction of 3DXRD data for a large sample volume, initially containing upwards of 1000 grains. Reconstructions of the Al-Mg specimen revealed the presence of crystallographic texture, the preferred orientation of grains, with a distinct Cube component. Grains with similar crystallographic orientations were not found randomly distributed throughout the specimen but rather in clusters. This resulted in a nonrandom distribution of low and high-angle grain boundaries. The latter migrated on average about twice as fast as their low-angle counterparts. Although the mean grain size increased approximately linearly with the square root of the annealing time (as predicted by isotropic grain growth models), wide variations were measured in the growth rate of individual grains, and abnormally growing grains were observed at the boundaries between grain clusters. In the semisolid Al-Cu samples, the rigid-body rotation of grains was found to occur in parallel to coarsening by Ostwald ripening. Both the coarsening and rotation rates increased with increasing fraction of liquid phase. Two types of rotations were observed: (1) random rotations, associated with Brownian motion and the redistribution of the liquid phase during annealing, and (2) directed grain rotations, caused by the steep gradient in interfacial energy for low-angle grain boundaries. The non-standard coarsening mechanisms observed in both aluminum alloys demonstrate the necessity of studying microstructural evolution in 3D.