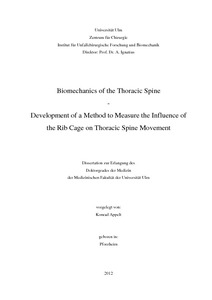 Little is known about the biomechanics of the thoracic spine. Biomechanical in-vitro-experiments are usually conducted with isolated thoracic spine specimens. The thorax performs a stabilizing and thereby limiting effect on thoracic spine flexibility. The main objective of this study was to develop a new method of measuring the influence of the ribs and sternum on thoracic spinal movement. Therefore two polysegmental specimens were obtained for the experiments. The thoraces were equipped with self-reflecting sphere markers and then fixed in the spine loading simulator. The global range of motion (ROM) was measured with the spinal loading simulator. Relative movements between subordinate structures like adjacent vertebrae were recorded with the Vicon Motion Tracking System. To detect the monosegmental as well as polysegmental motions, two different experiments were obtained. The first experiment measures the global spine movement, beginning with a polysegmental specimen (C7-L1) with ribs and sternum. By stepwise reduction of these anatomical structures, the influence of the structures could be measured. The ROM increased in all three loading directions after each stepwise reduction. The monosegmental movement showed the same trend as the global movement of the spine. With the second experiment the monosegmental motions were investigated. The specimen was divided in functional spinal units (FSUs), leaving the corresponding rib pairs and if existing a sternal part. The same stepwise reductions as in the first experiment were conducted. The same trend as in the first experiment can be seen, the ROM for the FSUs increased after each reduction step. To summarize the main states of this study, the sternum and ribs do have a limiting and thus likely stabilizing effect on thoracic spinal movement. Moreover, a new method was developed on which the proper motion of each rib can be measured, as well as the sternal motion.