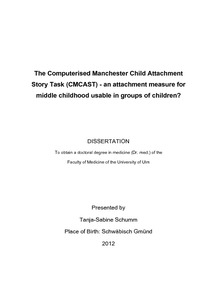 Introduction: The Computerised Manchester Child Attachment Story Task (CMCAST) is a representational technique to assess attachment patterns of young children. The aim of this study was to investigate if the CMCAST can be used with up to five children simultaneously and if CMCASTs can be rated reliably under these circumstances. Methodology: Eighty-six children aged 5 - 8 were recruited from four primary schools and tested in pairs and in groups of three, four and five children on the CMCAST. CMCASTs were given an attachment category when possible and 13 (22 %) CMCASTs were blindly re-rated. All participating children were asked for their views on the CMCAST. Results: CMCASTs could be simultaneously administered in these groups of children. CMCASTs of 59 children (69 %) could be given an attachment category score. Thirteen CMCASTs (15 %) could not be rated due to technical/computer problems and 14 CMCASTs (16 %) due to insufficient quality. Data loss increased when the number of children tested simultaneously was increased from pairs to groups of three, four or five children. Data loss was similar in groups of three, four or five children. Younger children ( < 7 years) produced less rateable CMCASTs. The distribution of attachment patterns in regards to secure and insecure attachment was comparable to other normative samples; scores for disorganised attachment were lower in our study. There was 85 % agreement between raters (kappa = 0.44). Almost all children said that they enjoyed CMCAST participation. Discussion: CMCAST administration seems feasible in a group setting. It may be more difficult to measure disorganisation on the CMCAST than the MCAST. Maybe more children with secure attachment patterns were recruited into the study and/or the older age of the sample may have confounded the rating of disorganisation. The CMCAST may prove an important tool for measuring attachment patterns in large samples.