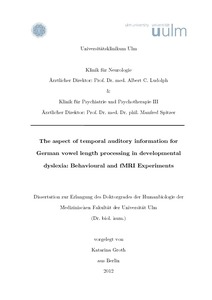 Poor phonological processing is considered as the core symptom of developmental dyslexia (DD). Yet, it is still debated whether this deficit is the primary cause or whether it reflects a secondary symptom resulting from impairments in the processing of basic acoustic parameters of the speech signal, like rapid temporal processing. Aim of this work was to investigate temporal auditory processing in DD on a behavioural and neural level by means of a German vowel length discrimination task. Vowel pairs differing only by vowel length, being characterized by temporal and spectral cues, were chosen. Two types of long-short vowel pair differences were varied: In the phonological condition (PC), pairs of natural vowels were used, differing temporally and spectrally. In the temporal condition (TC), a natural vowel was combined with a manipulated one to keep spectral content of long and short vowels identical and thus, differing only temporally. Vowels were embedded into pseudowords and presented successively in a same-different task. 20 adolescents and adults with DD and 20 age matched controls participated in a behavioural and fMRI experiment. Discrimination accuracy differed in the TC only, with dyslexics performing significantly inferior compared to controls. Brain activation in the TC, but not in the PC, was observed bilaterally within the anterior insular cortices (AIC) in both groups and within the left inferior frontal gyrus (IFG) in controls. Group subtraction analyses were not significant. Subgroup analyses (based on TC performance) revealed decreased activation of the AIC and the left IFG in low performing dyslexics compared to high performing controls. The findings of this work support the notion that DD is associated with deficits in the processing of temporal auditory information and indicate that the left IFG and the AIC are part of a neural network involved in temporal auditory processing, which seems to be impaired in at least a subgroup of subjects with DD.