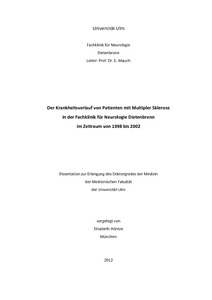 The disease course of 373 patients treated between 1998 and 2002 in a MS-specialised clinic (Clinic for Neurology Dietenbronn of the University of Ulm) was documented, partly also by means of questionnaires. Therapeutic approaches reached from varying specific therapy (immunomodulation or immunosuppression) to exclusively conservative treatment. The evaluation was performed retrospectively on an unselected observation and description of the total group and individual subgroups. In the total group the mean EDSS (Expanded Disability Severity Scale) rose from 5.3 in 1998 to 6.0 in 2002. The secondary-progressive disease course increased from initially 66 % to 74 % in 2002. Pyramidal tract lesions increasingly characterized the dominant clinical picture (68 % in 1998, 74 % in 2002). By using varying specific therapy, a stabilisation was reached with more than two-thirds of the patients. The dropout rate of about 10 % was low.