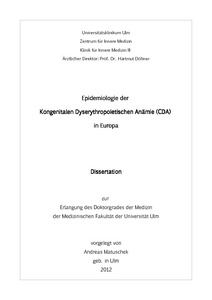 Congenital dyserythropoietic anemias (CDAs) are rare hereditary disorders characterized by ineffective erythropoiesis and striking abnormalities of erythroblast morphology. The mutated genes are known for the most frequent types, CDA I and II, but data about their frequency do not exist. The objective of this retrospective study was to estimate the frequency of CDA I and II, based on all cases reported in the last 42 yr in publications and identified registries or surveys. Reports were collected of 124 and 377 confirmed cases of CDA I and CDA II cases, respectively. The cumulated incidence of both types combined varied widely between European regions, with minimal values of 0.1 cases/million in Scandinavia and 2.70 cases/million in Italy. CDA II is more frequent than CDA I, with an overall ratio of approximately 3.2, but the ratio also varied between different regions. The most likely explanations for the differences are both differences in the availability of advanced diagnostic procedures and different levels of the awareness for the diagnosis of the CDAs. The estimations reported here are most probably below the true incidence rates, because of failure to make the correct diagnosis and to underreporting.