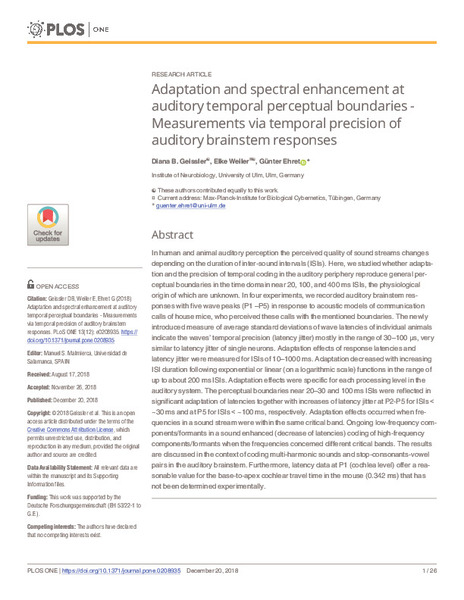 In human and animal auditory perception the perceived quality of sound streams changes depending on the duration of inter-sound intervals (ISIs). Here, we studied whether adaptation and the precision of temporal coding in the auditory periphery reproduce general perceptual boundaries in the time domain near 20, 100, and 400 ms ISIs, the physiological origin of which are unknown. In four experiments, we recorded auditory brainstem responses with five wave peaks (P1 –P5) in response to acoustic models of communication calls of house mice, who perceived these calls with the mentioned boundaries. The newly introduced measure of average standard deviations of wave latencies of individual animals indicate the waves’ temporal precision (latency jitter) mostly in the range of 30–100μs, very similar to latency jitter of single neurons. Adaptation effects of response latencies and latency jitter were measured for ISIs of 10–1000 ms. Adaptation decreased with increasing ISI duration following exponential or linear (on a logarithmic scale) functions in the range of up to about 200 ms ISIs. Adaptation effects were specific for each processing level in the auditory system. The perceptual boundaries near 20–30 and 100 ms ISIs were reflected in significant adaptation of latencies together with increases of latency jitter at P2-P5 for ISIs< ~30 ms and at P5 for ISIs<~100 ms, respectively. Adaptation effects occurred when frequencies in a sound stream were within the same critical band. Ongoing low-frequency components/formants in a sound enhanced (decrease of latencies) coding of high-frequency components/formants when the frequencies concerned different critical bands. The results are discussed in the context of coding multi-harmonic sounds and stop-consonants-vowel pairs in the auditory brainstem. Furthermore, latency data at P1 (cochlea level) offer a reasonable value for the base-to-apex cochlear travel time in the mouse (0.342 ms) that has not been determined experimentally. PLOS ONE | https://doi.org/10.1371/journal.pone.0208935 December 20, 2018 1 /