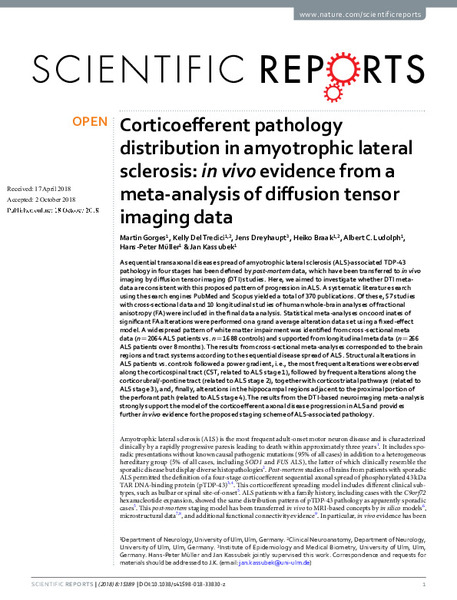 A sequential transaxonal disease spread of amyotrophic lateral sclerosis (ALS)-associated TDP-43 pathology in four stages has been defined by post-mortem data, which have been transferred to in vivo imaging by diffusion tensor imaging (DTI) studies. Here, we aimed to investigate whether DTI metadata are consistent with this proposed pattern of progression in ALS. A systematic literature search using the search engines PubMed and Scopus yielded a total of 370 publications. Of these, 57 studies with cross-sectional data and 10 longitudinal studies of human whole-brain analyses of fractional anisotropy (FA) were included in the final data analysis. Statistical meta-analyses on coordinates of significant FA alterations were performed on a grand average alteration data set using a fixed-effect model. A widespread pattern of white matter impairment was identified from cross-sectional meta data (n = 2064 ALS patients vs. n = 1688 controls) and supported from longitudinal meta data (n = 266 ALS patients over 8 months). The results from cross-sectional meta-analyses corresponded to the brain regions and tract systems according to the sequential disease spread of ALS. Structural alterations in ALS patients vs. controls followed a power gradient, i.e., the most frequent alterations were observed along the corticospinal tract (CST, related to ALS stage 1), followed by frequent alterations along the corticorubral/-pontine tract (related to ALS stage 2), together with corticostriatal pathways (related to ALS stage 3), and, finally, alterations in the hippocampal regions adjacent to the proximal portion of the perforant path (related to ALS stage 4). The results from the DTI-based neuroimaging meta-analysis strongly support the model of the corticoefferent axonal disease progression in ALS and provides further in vivo evidence for the proposed staging scheme of ALS-associated pathology.