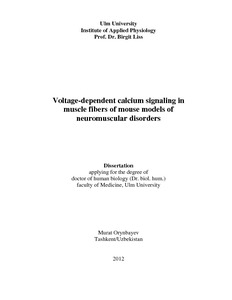 Patients with genetically inherited neuromuscular disorders such as malignant hyperthermia (MH), central core disease (CCD) and Huntington’s disease (HD) often suffer from muscle dysfunctions. These abnormalities result from mutations causing malfunctioning of type 1 ryanodine receptor (RyR1) Ca2+ channels which bound with dihydropyridine receptor (DHPR) protein in the muscle cells. Investigation of the functionality of the Ca2+ channels from mutation-affected tissues can help in understanding of the changes detected in the excitation-contraction (EC) coupling of the skeletal muscle fibers. Three types of genetic alteration were in the focus of this work. The I4895T and Y524S mutations of the RyR1, known to be responsible for MH and CCD, respectively, were studied in corresponding IT/+ and YS/+ mouse models. The effects of the huntingtin mutation were studied in the R6/2 mouse model. The two-electrode voltage clamp technique was applied on single fibers enzymatically isolated from fast interosseous mouse muscles. The observed differences in the functional characteristics of muscle fibers from IT/+ and YS/+ knock-in mice have provided the evidence that the mutations cause regulation of EC coupling by two distinct mechanisms, i.e. EC uncoupling and enhanced RyR1 Ca2+ leak. The ß-adrenergic stimulation of YS/+ muscle fibers conducted with adrenaline, terbutaline and isoproterenol have revealed that the YS/+ muscle fibers have higher sensitivity to the drug stimulus than the normal fibers. The R6/2 mouse skeletal muscle fibers showed altered functioning of both RyR1 and DHPR Ca2+ channels under the stress induced by toxic mutant huntingtin. The findings have demonstrated that the I4895T and Y524S mutations directly affect the RyR1 Ca2+ channel. Distortions in Ca2+ signaling were also observed in R6/2 muscle fibers. However, whether the mutant huntingtin protein affects the RyR1 in R6/2 model directly or through other biochemical mechanism remains an open question.