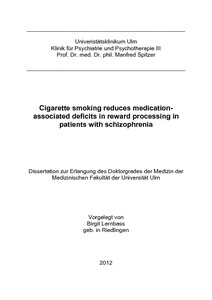 Imaging studies of reward processing have demonstrated a mesolimbic-mesocortical dopaminergic dysfunction in schizophrenia. Such studies on reward processing in patients and also in healthy controls showed that differential activations of dopaminergic brain areas are associated with adaptive changes in response speed related to different reward values. Given this relationship, we investigated reward processing on the behavioural level in a larger sample of 49 medicated patients with a diagnosis of schizophrenia (ICD-10 F20) and 49 healthy controls. Subjects were instructed to react by button press upon two different stimuli in order to retain a 60 % chance winning a previously announced high (1 $) or low (20 ¢) amount of money paid to participants after the experiment. Concordant with previous reports on deficits in reward processing, acceleration of reaction times in patients upon low rewards differed significantly (p < 0.05) from healthy controls in our present behavioural study. This effect was pronounced in the non-smoking subgroup of patients (n = 24). In this subgroup, we also observed a significant (p < 0.05) positive correlation with medication type (relatively high vs. low D2 receptor affinity) and with the PANSS score, the latter with a trend to significance (p = 0.08). Our study demonstrates that reaction time measures in a monetary reward task might constitute a feasible behavioural proxy for dopaminergic dysfunction and its different dimensions regarding psychopathology but also medication in patients with schizophrenia. In line with clinical observations, our findings support the notion that smoking modulates medication-associated side effects on reward processing in patients with schizophrenia.