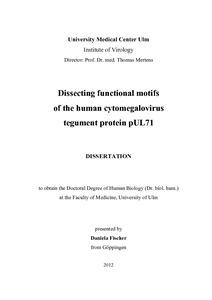 The generation of infectious virus particles in HCMV infected cells is a very complex and only a partially understood process. To determine the detailed mechanistic processes essential for efficient HCMV morphogenesis, it is crucial to identify and investigate the function of involved viral and cellular proteins. In this work, the function of the tegument protein pUL71 was characterized during HCMV infection. Ultrastructural analysis revealed that pUL71 is required for efficient secondary envelopment. Here, the importance of pUL71 for the generation of virus progeny was shown by an impaired viral growth of the UL71 stop mutant virus compared to the HCMV wild-type virus. The role of pUL71 in the process of secondary envelopment was further supported by its association with TGN membranes, which are currently in discussion to serve as the HCMV envelopment site. Furthermore it could be shown that pUL71 recruits the cellular ESCRT-associated protein Vps4A to the viral assembly compartment suggesting that the cellular ESCRT machinery might be involved in HCMV secondary envelopment. The Vps4A interaction domain was identified at the C-terminus of pUL71. Sequence analysis of this domain revealed striking similarities to the MIM2 domain of ESCRT-III proteins which are the cellular interaction partners of Vps4A. These sequence similarities and the importance of pUL71 during the HCMV secondary envelopment leads to the hypothesis that pUL71 might mimic the function of ESCRT-III proteins during HCMV infection to support viral envelopment. Another discovered viral pUL71 interaction partner is the tegument protein pUL103, which is also involved in late steps of HCMV morphogenesis. The similar growth defect of the virus mutants in the absence of pUL71, pUL103 or both proteins together combined with the similar localization of both proteins at the AC leads to the hypothesis pUL71 and pUL103 might form a functional complex facilitating HCMV secondary envelopment.