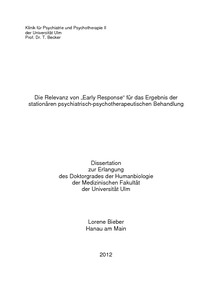 OBJECTIVE: To determine importance of an early response to later treatment duration is considered. Furthermore, predictors of therapeutic outcome were examined in their relevance for an early response. METHODS: 205 psychiatric inpatients who were mainly diagnosed with an affective disorder or schizophrenia were included in the study. Treatment course was assessed weekly by means of the Outcome Questionnaire 45.2. A 10% and a 20% reduction compared to the OQ 45.2 baseline scores and an improvement that fulfilled criteria of a reliable change were defined as cutoff scores for an early response. Sensitivity and specificity were calculated and ROC-analyses as well as survival analyses were performed. The relevance of important outcome predictors in their impact on an early response to treatment was assessed by means of logistic regression. RESULTS: Early response could not predict therapeutic success at discharge. High specificity scores (65 % - 87 %), however, indicated that an initial nonresponse was a threat to a negative outcome. Early responders reached cutoff scores for therapeutic success within a shorter time when cutoff for early response was a reliable change compared to baseline scores. Job situation, baseline illness severity and intake criteria were found to be predictors of an early response to treatment. CONCLUSIONS: Many predictors of a favorable outcome seem to be effective later in treatment.