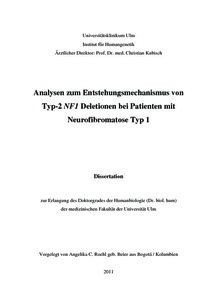 During my doctoral thesis I was primarily investigating recurrent rearrangements of the NF1 gene region caused by nonallelic homologous recombination (NAHR). Type-1 and type-3 NF1 deletions which occur predominantly during meiosis have been already analyzed in several contexts. Type-2 NF1 deletions and their underlying mechanism are less well understood. I could show that type-2 deletions are mediated by intrachromosomal NAHR during mitosis. Therefore, I have used type-2 NF1 deletions as a model system to identify specific features of mitotic NAHR. In contrast to type-1 and type-3 deletions (meiotic) that show breakpoint clustering in hotspots of high GC-content and DNA stability the identified mitotic associated breakpoints did not cluster within hotspots and were located in regions of significantly lower GC-content and DNA stability. As an additional promoting factor of mitotic NAHR I have analyzed runs of homozygosity in the NF1 gene region and their association with type-2 NF1 deletions. However, runs of homozygosity directly flanking the NF1 deletion region on both sides were not found to occur disproportionally in NF1 patients harboring type-2 deletions compared to controls. But it cannot be excluded that runs of homozygosity may increase the frequency of mitotic NAHR. A specific run of homozygosity located 525 kb proximal to the deletion interval was found to occur more frequently. The third element of my work was a participation in a clinical study of patients with type-1 NF1 deletion and their correlating phenotype. Due to the frequent tumor presence and growth the findings showed the importance to analyze large NF1 deletions and the regular monitoring of NF1 patients.