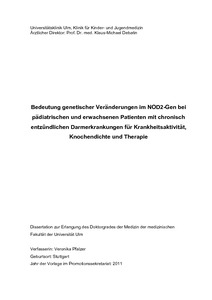 Background: Influence of genetic variants in the NOD2/CARD15 gene may play a more important role in disease behavior of pediatric-onset than in adult-onset Crohn’s disease (CD). Chronic inflammation is associated with the presence of osteoporosis. Aim: The objective of this study was to identify genotype phenotype associations between NOD2/CARD15 single nucleotide polymorphisms (SNP) genotypes and overall disease activity, disease behavior, bone mineral density and response to therapy. Methods: NOD2/CARD15 SNPs were tested in 88 patients with pediatric-onset and 104 adult-onset Crohn’s disease and compared regarding disease behavior and activity, response to therapy and bone mineral density (BMD). Results: In the adult Crohn’s group there was no significant difference between NOD2 genotype and phenotype. In contrast, pediatric-onset Crohn patients with NOD2 variants are more affected than NOD2 wild type patients. They had underweight at onset and during course of the disease more frequently. Complications and the need for surgery were observed more often and the PCDAI-score was significantly higher with more need for hospital care in the NOD2 SNP group. Furthermore, differences were found regarding the treatment. Interestingly, also the average bone mineral density (BMD) Z-score was lower in this group and osteoporosis was found more frequently than in the NOD2 wild type group. Osteoporosis was independent of disease location, but significantly associated with a higher PCDAI. Conclusions: In contrast to adult onset, there is a strong influence of NOD2 gene variants towards a more affected phenotype in pediatric-onset of Crohn’s disease with underweight, higher disease activity, the need for intensive immunosuppressive therapy, surgery and hospital care and lower bone mineral density. Thus young age and a NOD2 SNP are risk factors frequently associated with a moderate to severe course of disease.