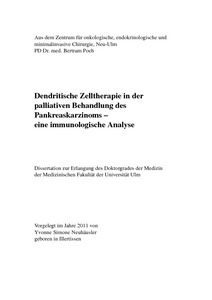 Background: The prognosis of pancreatic cancer is presumably poor: In palliative situations the median survival is only half a year using gemcitabine. So new treatment alternatives are urgently sought. One of these are antigen loaded dendritic cells (DC), which are powerful antigen-presenting cells (APC) of the immune system and which can induce antitumor T cell responses. Material and methods: DC were generated from peripheral blood cells of 134 patients suffering pancreatic carcinoma in the "Zentrum für onkologische, endokrinologische und minimalinvasive Chirurgie" in Neu-Ulm between 2001 and 2010. The procedure for collecting the mature DC was performed due to GMP-standards in the laboratory of "Cabion Technologies" in Ulm. For purity control of the DC flowcytometric analyses were used by determination of costimulatory molecules. Results: Under DC-therapy no major side effects were observed except occasional mild fever (n = 19). The median survival of the 124 patients receiving additional chemotherapy - mostly as a monotherapy with gemcitabine - was 9,0 months whereas the 10 patients, who refused chemotherapy, had a median survival of 5,9 months (p = 0,044). Patients (n = 85), who started treatment within 2 months following diagnosis, lived significantly longer than patients, who began treatment later (n = 49): 10,4 months versus 7,6 months (p = 0,029). 33 patients repeated up to 5 times DC-therapy (median survival: 13,4 months), whereas 79 patients had a single cycle (9,0 months; p = 0,027). To examine the influence of DC vaccination on the immune system, we analyzed the amount of several immune cells before and after treatment through flow cytometry in 25 patients: The number of T Lymphocytes (p < 0,03) and CD8 positive cells (p < 0,001) increased significantly. Conclusion: The combination of DC with gemcitabine shows significant improvement in survival for patients with advanced pancreatic cancer. DC are able to stimulate an antitumoral T cell response.