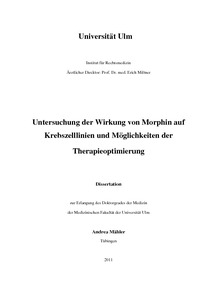 The opioid D,L-methadone previously has been shown to induce apoptosis by activating caspases in leukemia cell lines and to sensitize leukemia and glioblastoma cell lines for doxorubicin-induced apoptosis. In the present dissertation the apoptosis induction in leukemia and glioblastoma cells by the commonly used analgetic opioid morphine as well as the effects of a combination of opioid drugs were examined. Treatment of the leukemia cell line CEM and the glioblastoma cell line A172 with morphine did not increase cell death rates compared to the untreated controls, whereas the leukemia-derived cell line HL-60 was shown to be susceptible to morphine treatment in a time- and concentration-dependent manner. Cell death occurred both after treatment with toxic and therapeutic morphine concentrations and was shown to be caspase-dependent and mediated by activation of caspase 9 and 3. The proapoptotic protein Bax was upregulated while the caspase-inhibiting, antiapoptotic protein XIAP was degraded. These observations suggest the observed effects of morphine to be an apoptotic cell death, mediated by the intrinsic apoptotic pathway. Furthermore, the combination treatment of morphine and fentanyl potentiated the cell death induction compared to morphine alone in the HL-60 cells. Again, the mitochondrial pathway of apoptosis was triggered in the co-treated cells with an activation of caspase 9 and 3 as well as Bax upregulation and XIAP downregulation. Additionally, after treatment with morphine and fentanyl, caspase 8 was activated as well, possibly due to an upregulation of the Fas-receptor/Fas-ligand system, which also could be detected by western blot analysis. However, the possible therapeutic benefit of the apoptosis induction in leukemia cells by morphine remains questionable. Compared to the cytotoxic effects of morphine, D,L-methadone seems to be much more effective in inducing apoptosis in cancer cell lines.