Bone as a target for the complement system 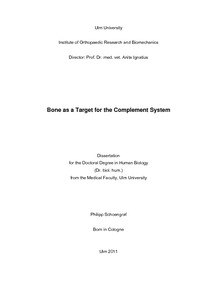 Fracture healing is impaired in patients with major trauma, accompanied by systemic activation of the complement system. The reasons of this delay in healing remain incompletely understood. The aim of the present study was to investigate the mutual influences of the complement system and bone cells, including in this term mesenchymal stem cells (MSC), osteoblasts (OB) and osteoclasts (OC). Quantitative assessment of mRNA expression and immune fluorescence staining revealed the expression of several important components, regulators and receptors of the complement system in MSC, OB and OC. Osteoclasts where able to activate complement C5 as assessed by a C5a specific ELISA. Analysis of mRNA expression and release of the pro-inflammatory cytokines interleukin (IL)-6 and IL-8 in OB showed no response to C3a or C5a alone. However in co-stimulation with IL-1ß both anaphylatoxins significantly induced the expression and release of IL-6 and IL-8 indicating a modulatory role of osteoblasts on the inflammatory response. Additionally the expression of the OC regulatory proteins receptor activator of nuclear factor kappaB ligand (RANKL) and osteoprotegerin (OPG) where significantly increased following co-stimulation with IL-1beta and C3a or C5a indicating an influence on the interactions of osteoblasts and osteoclasts. Both C3a and C5a had no influence on the osteogenic differentiation. However, C3a or C5a significantly enhanced osteoclast formation in absence of RANKL and macrophage-colony stimulating factor (M-CSF) suggesting a direct regulatory influence of complement anaphylatoxins on osteoclast formation. It can therefore be proposed that complement contributes to the induction of an inflammatory response in osteoblasts and enhances osteoclast formation under pro-inflammatory conditions as they are present in inflammatory bone disorders or during fracture healing in particular after multiple trauma.