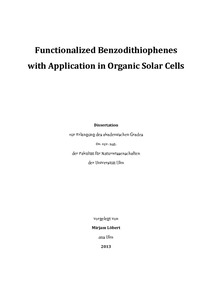 Functionalized oligothiophenes incorporating fused central moieties, such as benzodithiophene and derivatives thereof were synthesized. Their thermal, optical, and electrochemical properties were investigated and they were implemented as donor materials in different types of organic solar cells (OSC). Dicyanovinyl end-capped quaterthiophenes 1-7 containing fused benzo[2,1-b;3,4-b´]dithiophene (BDT) and naphtha[2,1-b:3,4-b´]dithiophene (NDT) as central core were designed for vacuum-processed OSCs. Compared to DCV4T, oligomers containing the BDT unit resulted in blue-shifted absorption and emission maxima and an increase in the optical and electrochemical band gap. Solar cells were fabricated by vacuum-processing using C60 as the electron acceptor. PHJ solar cells displayed high VOCs and BDT 1 achieved efficiencies of up to 2.4 %. Structural changes at the fused core unit resulted in an increased performance and an efficiency of 2.7 % was achieved for derivative 6. In BHJ devices, the highest PCE of 3.6 % was obtained for oligomer 1, which is higher than the efficiency measured for devices containing DCV4T. In order to obtain donor molecules for solution-processed organic solar cells, a series of sexithiophenes with solubilizing side chains were designed and benzo[2,1-b;3,4-b´]dithiophene as well as 4,8-bis[(2-ethylhexyl)oxy]benzo[1,2-b:4,5-b´]dithiophene were investigated as fused central units. 1,1-dicyano-2-octyl-vinyl was developed as new acceptor end group. This structural change resulted in a decreased acceptor strength and weaker intermolecular interactions which were reflected in hypsochromically shifted absorptions and larger band gaps. The oligomers were implemented as donor components into solution-processed OSCs with PC61BM as the electron accepting material. Benzo[2,1-b;3,4-b"]dithiophene-containing derivative 11 exhibited efficiencies of up to 1.3 %, which could be further increased to 2.0 % by using BDT 13 as an additive since both FF and JSC increased.