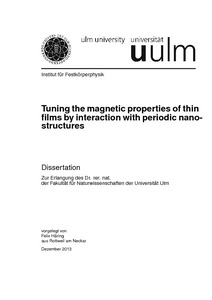 This work presents a study of the magnetic properties of nanoscaled, hexagonally ordered antidot arrays within magnetically soft thin films. The antidot arrays are prepared by colloidal lithography. Magnetic characterization is achieved by integral methods such as SQUID magnetometry and magnetotransport measurements as well as microscopic magnetometry methods such as magnetic force microscopy and X-ray microscopy. All experimental methods are supported by micromagnetic computer simulations. The presence of the antidots generally leads to a magnetic hardening effect with enhancements of the coercive fields by typically two orders of magnitude. The coercive field can be tuned by the antidot array geometry in a wide parameter range and shows a strong dependence on the saturation magnetization and exchange constant. Periodicity of the antidot lattice reflects in the remanent magnetization, as revealed by MFM. Dependent on the ratio between antidot diameter and lattice constant (d/a-ratio), two distinct domain patterns can be identified. The pattern arising in antidot arrays with large d/a-ratio resembles the charge ordered state in geometrically frustrated artificial spin-ice. This analogy is further studied. For both cases, a strong in-plane anisotropy of the magnetization reversal with respect to the antidot lattice arises. Integral magnetometry methods are not applicable to resolve this anisotropy, as the self-assembly approach of the sample preparation lacks long range order. This is overcome by measuring the anisotropic magnetoresistance through constrictions processed by focused ion beam milling, allowing for a well-defined orientation between magnetic field an antidot lattice. For samples with small d/a-ratio, this novel method identifies the nearest neighbor direction of the lattice as the easy axis, while a large d/a-ratio is linked to an easy axis in the next nearest neighbor direction.