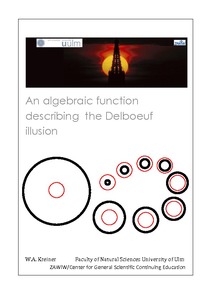 The Delboeuf illusion is investigated for framing ratios FR between 0.37 and 4.49. Around FR = 1.4, the apparent size of the target exhibits a maximum and then decreases continuously. While the increase is ascribed to assimilation, the following exponential decrease is explained by a loss of the contextual interaction between the circles with increasing framing ratio. For an even larger inducing circle the perceived contrast effect is interpreted as a consequence of size constancy. At the largest framing ratio investigated the target circle appears to be even smaller than it is perceived without any inducing circular line. Each of the three effects is described by an algebraic expression as a function of the framing ratio, i.e., by a linear term, an exponential decay term and by a power function, respectively. The combined expression is fitted to the experimental data. For the size constancy parameter the value n = 0.0584(64) has been obtained.