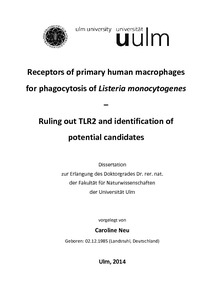 Listeria monocytogenes (Lm) is a Gram-positive foodborne pathogen which, in case of a compromised immune system, may cause listeriosis. Macrophages play a key role in the defence against Lm and are important for the induction of an efficient immune response to the pathogen by the healthy host. To elucidate the infection process in more detail, the usage of a suitable model system is of great importance. There are considerable discrepancies between the human and the murine immune system, especially with respect to macrophages and their effector functions. This highlights the need for an appropriate human macrophage model to study Lm infections. In the presented doctoral thesis, different known macrophage models were investigated and validated. The results suggest that primary human macrophages differentiated ex vivo from monocytes isolated by negative selection represent the most suitable human macrophage model to study Lm infection. To analyse this process further, an siRNA based knockdown protocol was established, which was transferred to a robotic unit to perform a high content screen. The results performed during the process of establishing the screen suggest that in human macrophages, unlike in murine macrophages, phagocytosis of Lm is TLR2 independent. These results were further corroborated by a range of control experiments. During the actual screen the entire set of human kinases as well was a large number of surface receptors of macrophages were tested for their contribution to listerial phagocytosis. Interestingly, TLR7 was identified as a hit, highly suggesting the contribution to this receptor to trigger Lm phagocytosis. In addition, the gap junction protein GJA1 and the HSP90 interaction partner ALS2CR7 were identified as candidates.