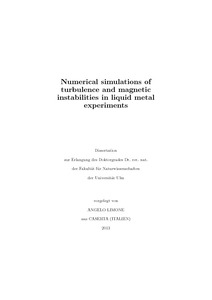 Astrophysical observations show that planets, stars, galaxies, and galaxy clusters have magnetic fields of various strength and spatial scales. Yet the origin of those magnetic fields and how they affect the development of forming structures such as protostars, protoplanetary disks, and protogalaxies is still not clear. Magnetic fields tend to decay because of magnetic diffusion, but observations show that many magnetic field structures are older than the typical diffusion time scale of the host astrophysical object: Another mechanism must take place in order to avoid the decay of the magnetic field. In geo- and astrophysical environments the "dynamo" instability is often invoked in order to explain the creation (or the stability) of the observed large-scale cosmic magnetic fields, and in this case the effect is known as geophysical or astrophysical dynamo mechanism. This mechanism consists in the transformation of the kinetic energy of a fluid into magnetic energy. The origin of astrophysical magnetic fields is not the only unanswered question in this field of research: The interaction of preexistent magnetic fields with forming structures is still object of investigation. Indeed, under certain circumstances, the sole presence of a magnetic field (regardless of its strength) can strongly affect the behavior of particular astrophysical structures, by making those systems dynamically unstable to the so-called magnetorotational instability. In order to understand these two instabilities, laboratory experiments using liquid metals as working fluid have been designed and realized during the last decades. This task has turned out to be difficult since an unexpected behavior of the experiments occurred. In laboratory dynamos, for instance, the presence of turbulence can hinder the process, whereas in laboratory experiments aiming to study the magnetorotational instability, other concurrent and unforeseen instabilities can make the detection of this effect very difficult.