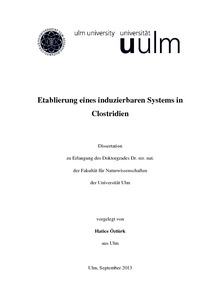 Clostridia are a group of strict anaerobic, gram positive bacteria. It is a diverse genera containing pathogen and also industrially important members. In the last years a lot of molecular tools for working with clostridia have been established. Until now it was not possible to establish an efficient inducible system for the use in e. g. acetogenic clostridia. During this work the use of two inducible systems was tested. The first was the use of gluconate as an inducer. After construction of reporter plasmids the recombinant C. acetobutylicum strains were used for induction with different concentrations of gluconate. The ß-galactosidase activities were measured and it was not possible to show any inducible enzyme activities. The second tested system was based on the lux-operon of V. fischeri where homoserinelactone was the inducer. Here two reporter plasmids containing the regulatory genes of the lux-operon were cloned and transformed into E. coli and C. acetobutylicum, respectively. While it was possible to show inducible enzyme activities after addition of homoserinelactone in the recombinant E. coli strain it was not the case for C. acetobutylicum. Quantitative RT-PCR studies showed that the limiting factor might be the transcription of the groESL-genes. Another part of this work was the determination of the transcriptional startpoint of the pta (phosphotransacetylase) and ack (acetatekinase)-Operon of C. ljungdahlii. This was done via primer extension analyses. After that a consensus promoter sequence could be identified. The successful transformation of two plasmids in C. acetobutylicum was shown.