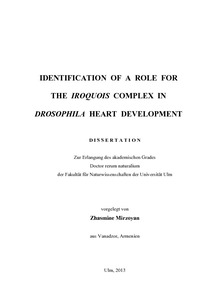 The Drosophila heart is a proven system for studying regulatory genes that are involved in cardiogenesis. The specification and differentiation of cardiac progenitor cells require complex interactions between a number of transcription factors. The Drosophila Iroquois gene complex (Iro-C) consists of three homeobox transcription factors: araucan (ara), caupolican (caup) and mirror (mirr). The Iro-C participates in various developmental processes such as determining positional identity in different tissues in Drosophila. To determine whether the Iro-C also regulates cardiogenesis, the embryonic expression pattern of the Iro-C factors was characterized and heart phenotypes in different Iro-C mutant embryos were analyzed. Detailed expression pattern analysis of the members of the Iro-C revealed the existence of a subpopulation of pericardial cells, which co-express Even-skipped (Eve) and Ara/Caup and a novel set of heart-associated cells that are characterized by the expression of the different members of the Iro-C. Furthermore, the phenotypic studies integrate Iro-C into the network of transcription factors whose concerted action determines a cardiac fate and indicate that the GATA factor Pannier requires Iro-C activity to function in cardiogenesis. Additionally, this study demonstrates that Caup binds to the enhancer region of hand, a bHLH transcription factor expressed in the visceral mesoderm and in the heart, and that Caup regulates the transcriptional activity of a hand reporter construct. Taken together, this work provides a new basis for further studies aiming to decipher the regulatory interactions between the factors that determine different cell fates in the dorsal mesoderm.