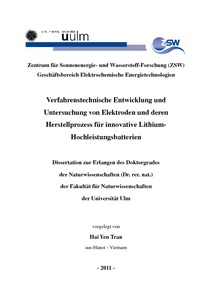 Nowadays, lithium-ion batteries have been widely used in small portable devices and automotive applications due to their high energy and power density. A proper tailoring of the electrodes can greatly improve both the electrochemical performances and the energy density of the battery. In the present work, some significant parameters during the preparation of LiNi0.8Co0.15Al0.05O2 (NCA)-based cathodes were investigated. The electrode thickness, the degree of compacting and the conductive agent type and mixing ratio have proven to have a strong impact on the electrochemical performances of the composite electrodes, especially on their behaviour at high C-rates. Further it has been shown that the compacting has an essential influence on the mechanical properties of NCA coatings, according to their total, ductile and elastic deformation behaviour. Besides the optimization of the technological preparation steps the capacity as well as the rate capability of the cathode was further developed by mixing of two active materials - e. g. layered oxide and spinel. Therefore the influence of blending LiMn2O4 spinel with NCA onto the electrochemical and thermal behaviours of the resulting blend electrodes was investigated. The results indicate that NCA addition has a beneficial effect on the discharge capacity of the blends, and thus on the energy density, but in the same time increases the irreversible capacity loss in the first cycle. Also, it deteriorates the rate capability. DSC/TG measurements showed that heat generation for blends containing 50 wt % NCA or less is significantly lower than in the case of pure NCA. Mn dissolution from spinel was considerably reduced by the addition of NCA. Following the cathode performance the mechanism of the ageing process of the blends was investigated as well and for the first time extensively defined.