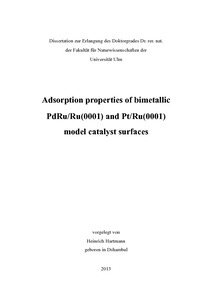 In this thesis the adsorption of CO and deuterium on Pt/Ru(0001) monolayer films and on PdRu/Ru(0001) surface alloys was investigated with TPD and IRAS, additionally the coadsorption of both molecules was investigated on the Pt/Ru(0001) surface under UHV conditions. The Pd and Pt parts of the surface displayed significantly lower adsorption energies for both probe molecules, compared to the Pd(111) and Pt(111) surfaces. This was explained by strain and electronic effects resulting from the formation of the bimetallic surfaces. For CO adsorbed on Pt/Ru(0001) the increase in mobility which results from annealing the surface from 90 to 150 K leads to spill-over of CO from the Pt to the Ru parts of the surface. This results in CO coverages on the Ru parts of the surface which are considerably higher than found on Ru(0001). In the case of CO and deuterium coadsorption, the preadsorption of one species was observed to block the subsequent adsorption of the respective other species. However, while no D2 adsorption was possible on surfaces saturated with CO, limited CO adsorption was still possible on surfaces covered with D2. Increasing Pt coverages were found to lead to an increase in COad coverages which can be achieved on bimetallic surfaces precovered with Dad. The combined results of adsorption experiments on the PdRu/Ru(0001) and Pt/Ru(0001) surfaces show that while the adsorption of both D2 and CO is weakened compared to the pure metallic surface components, the effect is more pronounced for D2 than for CO. For D2 the combination of two metals has a negative impact on the maximum coverage as well as on the adsorption kinetics. Most likely this is caused by an activation barrier for D2 adsorption on the weaker binding part of the surface. In the case of CO and D2 coadsorption on Pt/Ru(0001), the interactions between the two adsorbates lead to an additional destabilization of Dad, causing increasing displacement/blocking of Dad by CO with increasing Pt coverage.