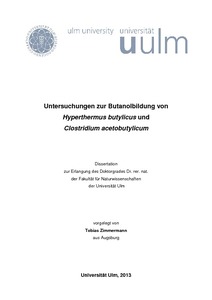 The hypothermophilic archaeon H. butylicus showed no butanol production after growth experiments. Also, no butanol production was observed after modification of growth conditions and after using a H. butylicus strain from a different source of supply. Thus, H. butylicus is not a butanol-producing archaeon and there is no alternative butanol synthesis pathway present. In this study, a small regulatory RNA of C. acetobutylicum has been described in detail for the first time. The sRNA SolB, which is involved in regulation of the solvent production in C. acetobutylicum, was characterized with respect to the transcript length and the transcription start point. The secondary structure of SolB was deduced from the sequence displaying a putative mRNA binding motif. Some experiments emphasize the correctness of the putative binding motif, but the ultimate evidence still has to be provided. "In silico" analysis with the small regulatory RNA SolB and the genome of C. acetobutylicum predicted a binding of SolB at the RBS of the mRNA of Spo0A (CA_C2071) and AdhE2 (CA_P0035). In both cases, the putative binding motif was involved in the binding. In order to find potential target mRNAs of SolB, proteome comparisons after two-dimensional gel electrophoresis were carried out with the strains C. acetobutylicum wildtype and C. acetobutylicum solB overexpression mutant. The comparisons revealed no apparent difference in the protein synthesis of the two strains. Thus, there were no indications of possible targets of SolB. The characterization of different overexpression and/or integration mutants of C. acetobutylicum regarding solvent production after growth in different media confirmed the mRNAs of Spo0A and AdhE2 as potential targets of SolB. The RNA-RNA band shift experiments using SolB and its possible targets did not result in any retardation. Thus, it still has to be proven whether the mRNAs of Spo0A and AdhE2 ar targets of SolB.