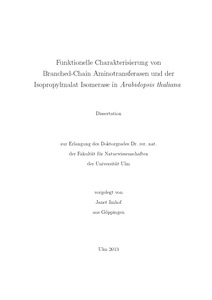 In this thesis, the main topic was to investigate the detailed biological roles of the isopropylmalate isomerase small subunit 1 (IPMI SSU1) as well as of the branched-chain aminotransferases 2 and 5 (BCAT2 and 5) in A. thaliana. For the analysis of IPMI SSU1 transgenic lines expressing an artificial microRNA targeting the IPMI SSU1 mRNA (amiR-SSU1-B) were established. These mutants showed a severe macroscopic and microscopic phenotype as well as changes in the expression of genes involved in development processes and changes in contents of different phytohormones. Metabolite profiling of these mutants revealed changes in the free levels of isopropylmalate and glucosinolates as well as its intermediates demonstrating a function of IPMI SSU1 both in leucine biosynthesis and the methionine chain elongation. Surprisingly the levels of free leucine slightly increased. With regard to BCAT2, this gene seems to play no role in the glucosinolate formation, while it was shown that BCAT2 is involved in the branched-chain amino acid (BCAA) catabolism. In vitro activity assays revealed that recombinant BCAT2 deaminates all BCAA. The contents of BCAA in vivo in seeds are significantly higher in BCAT2 knockout mutants than in the correspondent wild types. Similar to other genes involved in the BCAA degradation the expression of BCAT2 is drastically induced under carbon starvation. The biological role of BCAT5 could not be clearly elucidated in this thesis. Transgenic bcat3-1 knockout mutants expressing artificial microRNAs against BCAT5 (amiR-BCAT5) as well as the T-DNA insertion line bcat5-2 did not show clear reductions in the BCAT5 transcript levels. In addition, there were just minor changes in the amino acid and glucosinolate levels in amiR-BCAT5 and the double mutant bcat5-2 x bcat3-1. Likewise, the metabolite profiles of the double mutants bcat4-1 x bcat5-2 and bcat5-5 x bcat4-2 did not reveal a distinct function of BCAT5 in amino acid and glucosinolate metabolism.