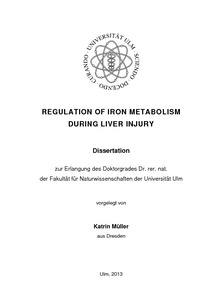 Chronic liver damage is frequently associated with hepatic iron overload, which represents a risk factor for progression of liver disease to cirrhosis or even hepatocellular carcinoma (HCC). Liver iron accumulation is most common in patients with alcoholic liver disease (ALD) and chronic hepatitis C (CHC) and develops because of a diminished production of hepcidin, the central regulator of iron metabolism. The mechanisms underlying the decreased hepcidin production in chronic liver disease and the reasons for the variability among patients with the same disease remain largely unknown. To examine the process of iron accumulation during chronic liver disease, two established mouse liver fibrosis models, i.e. application of thioacetamide (TAA) or carbon tetrachloride (CCl4) were analyzed. TAA, but not CCl4 led to a significant hepatic and systemic iron overload, which was due to a markedly reduced hepcidin expression in TAA model. As a potential mechanism, chronic TAA administration resulted in a profound impairment of CCAAT/enhancer-binding protein alpha (C/EBP-alpha)-DNA binding ability to hepcidin promoter due to a pronounced up-regulation of CCAAT/enhancer-binding protein (C/EBP)-homologous protein (CHOP), which presents a C/EBP-alpha-inhibitor. The importance of CHOP translates to human subjects, given that CHOP levels are fivefold elevated in ALD subjects and negatively correlate with hepcidin levels. The results established CHOP as an important regulator of hepatic hepcidin expression, leading to liver iron accumulation in chronic liver diseases. The differences in iron metabolism between the two widely used fibrosis models likely reflect the differential regulation of hepcidin expression in human liver diseases. In conclusion, TAA administration represents a unique model of liver injury-associated iron overload, which will become useful to understand the human situation.