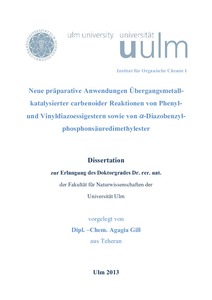 According to a suggestion of H. M. L. Davies a-diazoacetates and a-diazophosphonates can be divided into three groups depending on the secondary substituent on the diazo carbon: acceptor-, acceptor/ donor- and acceptor/ acceptor-substituted diazo compounds. Diazo compounds belonging to the same group typically exhibit similar reactivity characteristics (e.g. intermolecular or intramolecular C-H activation with acceptor/donor-substituted carbenoids, diastereoselective and chemoselective cyclopropanation with acceptor/ donor-substituted carbenoids, enantioselective allylic C-H activation with acceptor/ donor-substituted carbenoids, ...) which have been identified on the basis of such diazo compounds with transition metal catalyzed carbene transfer reactions. In particular, the corresponding reactions of the second group have been extensively studied mainly by Davies and coworkers. This thesis deals with other carbenoid reactions of a-phenyl- or a-vinyl-a-diazoacetates and a-diazobenzylphosphonates which may have potentially useful synthetic applications. Specifically examined were reactions with: aniline derivatives (N-H insertion, C-H insertion), acyclic enaminoesters (N-H insertion), secondary amines (N-H insertion), a,b-unsaturated aldehydes (epoxide formation), urea and urea derivatives (N-H insertion, cyclization), reactions with (E)-methacrolein oxime and trialkylsilanols (O-H insertion) and pyrazoles (N-H insertion). In most cases, the reaction behavior of the above diazo compounds was compared to that of the representatives of the second and third group.