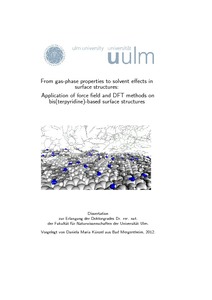 In this dissertation, the ordered adsorption of bis(terpyridine) (BTP) molecules was studied with force field and density functional theory (DFT) methods. From the calculations, one expects to gain deeper insight into the principles of structure formation as well as into the modification of such structures. The interplay between substrate-adsorbate interaction and intermolecular interactions in the adsorbate layer is critical for the formation of patterned surfaces. In this work, different computational methods were compared carefully as a starting point. In a first step towards modeling realistic systems, the electronic properties of isolated BTP molecules and their phenyl-septipyridine substitutes were addressed. The different kinds of interactions such as van der Waals interaction between surface and adsorbed molecule or hydrogen bonds between the BTP molecules provided further insight into the surface structure formation. In the next step, experimentally observed surface structures were simulated with force fields. Even though a qualitative agreement between theory and experiment could be obtained, the weak points of the theoretical methods could be perceived clearly. In standard DFT methods, van der Waals interaction is not taken into account properly without special correction schemes. On the other hand, force fields tend to overestimate van der Waals interactions and underestimate the weak hydrogen bonds that are important in such systems. The surface structures were then modified in different ways. A hexagonal 3,3’-BTP polymorph was used as a template for the ordered adsorption of further molecules. Here, a relation between the size of the guest molecule and its mobility could be found. In another approach, the surface could be modified in a chemical reaction with oxygen. Finally, an explicit solvation model was used in force field calculations. This model proved to be necessary for an accurate description of the system.